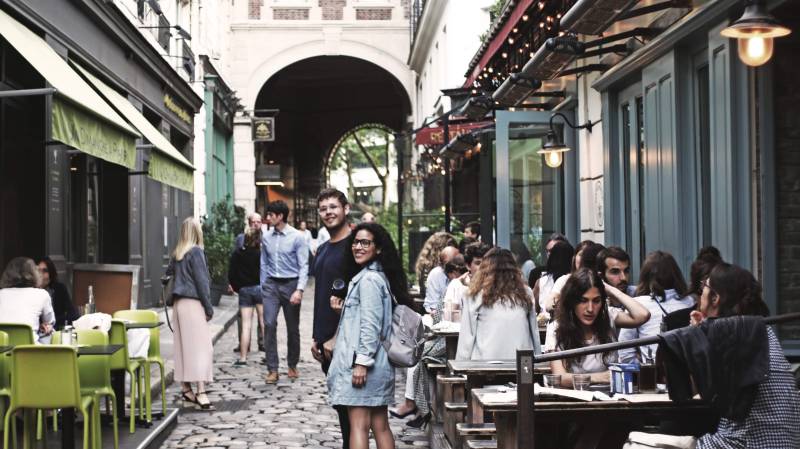 So many things to say about my first time in Paris… But today I am going to write about that ONE day that changed my perspective on trust and friendship, and having fun, and stuff…

So,  I booked a tour in Paris called “A cinematic walk!” with the awesome Panos. I thought this was perfect for me because, um, this is what I go to school for– film, TV, and Radio. I read the reviews and this seemed to be a perfect tour for me but I was a little scared because I’ve never taken a tour on my own.

Anyway, long story short, this tour took more hours than expected and it was more perfect than I had ever expected something- anything, to be. In this tour, we were three: Panos, David, and I. We were three strangers together in Paris but I am sure Panos is already used to this.

On the other hand, I was not. But strangely enough, we all ended the tour feeling really comfortable with each other (with a glass of wine– it was a plus!) During our tour, we visited a jazz bar located in the Latin Quarter, one of the locations of the film “La La Land.” David mentioned how he’d love to visit that bar while I had the same thought in the back of my head, I just didn’t feel like saying it just because…

I am really trying to get to the point, bear with me!

So, David and I had had many random conversations I’d probably have with someone I knew for a very long time– but I had just met David! After our tour ended, He mentioned that we should go to that bar and my immediate thought was: HECK YEAH! I really didn’t think of the obstacles that prevented me to go there, such as:

GLAD I NEVER DID!

David and I went to this amazing bar and even stopped by a crêperie nearby because he heard I hadn’t had any crêpes during my stay in Paris. He, a person whom I’ve never met before, was concerned that I hadn’t had that main thing you must have when in Paris! Isn’t he amazing? After having the best crêpes of our lives, we stepped into this amazing jazz bar but… just one little problem: we didn’t know how to dance jazz //:

Guess what? We didn’t care! We danced as if there was no tomorrow! We danced so much and it was just a different energy around us surrounded by more strangers that just wanted to have fun in a foreign country.

Where do I want to get to with this?

Well, so many things. But today, I just wanted to make emphasis on the fact that unexpected things could result in the best things that can happen to you– ever. Also, I kind of learn that you don’t have to know someone for a long time in order to call them “friends.” How? Let me explain.

David and I did the same things friends that know each other for a long time, would do–or wouldn’t, perhaps? To be honest, I think neither of us two was expecting to have that much fun with one another but I guess this was just an assumption because of the meaning the word “friends” has but has lost in this generation. Sometimes we expect so much from people we consider our friends yet receive so little; though friendship is not about “giving and receiving,” you always expect your friend to know when or how to help you during difficult moments. He and I knew we were looking for an experience like that and received it from the person we least expected. So whenever you feel like someone let you down, just remember that there’s another person ready to pick you up, and that person will be someone you least expected.

BTW: David, you are awesome and there should be more people like you in this world!